ANNOUNCING!
A New Course for Men and Women Who Want to Start Their Own Freelance Writing Business -- in Less than 14 Days

Introducing a proven system for starting a successful freelance writing business, that will help you get up and running in 14 days and earning four figures monthly within a few months of starting.

Hello, my name is Bamidele Onibalusi.

I've been featured on, and recognized by, several leading publications including Business Insider, Forbes, Fast Company and The Huffington Post. My work on Writers in Charge has been read by millions of people, and over 60,000 people are subscribed to my newsletter.

I'd like to tell you a story, of how I accidentally became a six-figure freelance writer...

...How I Accidentally Became a Six-Figure Freelance Writer

I had just recently heard about the Internet and the concept of “making money online.” To say I was fascinated would be an understatement: so I could sit in front of my computer all day and earn a good living? I mean, no 9 - 5 or working for someone else? I was hooked!

I was 16 then and had just failed the most important exam of my life (a national exam I needed to pass to get into university). Things just weren’t working. To say I was devastated will be an understatement.

No, I WAS a failure -- at least to those who were around me then and knew the significance of the exam I failed to my future as a young boy. So hearing about the possibility of earning money online gave me a new ray of hope for so many reasons... including the fact that:

So, with all the above reasons on my mind, I couldn’t be more excited about the possibility of earning a living online. I mean, I could earn good income without having to rely on my grades and working a 9 - 5? Sign me up!

However, I didn’t realize that I was in my own bubble -- that will soon bust. Maybe you’d have loved to read that everything just went well from there… that I got started, began to earn six figures within a short time and was soon driving lamborghinis. I wish! Except it was the exact opposite of the case!

Like many people who have taken a similar trajectory, I FAILED. In fact, I almost failed BIG!

I pursued the “make money online” stuff and poured all my heart in it (often working 10+ hour days!) for a whole 1 year and four months without really earning an income. I did so many things: online surveys, paid to click, paid to read, etc. In fact, I was so gullible I would have believed them if I was told I’d be paid to sleep… lol! You get the gist.

It wasn’t long before I realized that I was chasing a rabbit trail -- a pipe dream.

Perhaps, this make money online thing is just a bunch of hype? My hope was gradually vanishing when something happened…

I became an accidental freelance writer…

You see, I had originally been dismissive of freelance writing as a source of income -- as a career path.

I mean, in the early days my only impression of freelance writing is that the most you can make as a freelance writer is $3 - $5 (you’d be lucky to earn $15) per article. Boy (girl?), how wrong was I!

My entire worldview changed in an instant when I got my first client. This client reached out to me through a blog I was running then, told me they have a network of sites and wanted me to help with content. I was initially dismissive of the idea, but I thought it wouldn’t hurt to ask what they pay per article. They responded, “$100 per article.”

I couldn’t believe myself.

Now, I’d be honest: I had a luckier start than most people, and not everybody will start their freelance writing career earning $100 per article (and in the spirit of full disclosure: after that first client, I later got clients that paid me less than half that amount -- at least before I knew what I was doing), but that was how I got my start.

That was 7 years ago.

I’d later go on to have my first four figure month with that client a few months after our relationship began. I suddenly realized the potential in freelance writing and began to take a more intentional approach towards building my freelance writing business.

You see, a LOT has changed since I got my first client about seven years ago. My freelance writing business has grown so much that I am now a six-figure freelance writer, and I won’t tell you how much I earned in my best month as a freelance writer because you probably won’t believe it (suffice to say it is more than what many “stable” freelance writers earn in a year -- that’s not a typo, I meant in a YEAR!).

Today, I easily earn in excess of $1,000 per article -- that’s when I want to write. Getting to it, to earn a five figure income from my freelance writing business, I probably need to work less than 40 hours.

Let me put it this way: I practically have a license to print money. And I want to give you this same license.

With my proven system, you can be assured of a thriving freelance writing business, and an almost divine transformation in your finances.

I don’t make excessive promises, and you certainly won’t get paid to sleep (not with my system, anyway!).

You see, those who know me know that I probably don’t need to write a sales page to sell a freelance writing course. I mean, a little digging up on me will show that I know my mettle. Here are success stories I got from people who participated in one of my free challenges I ran a while back: 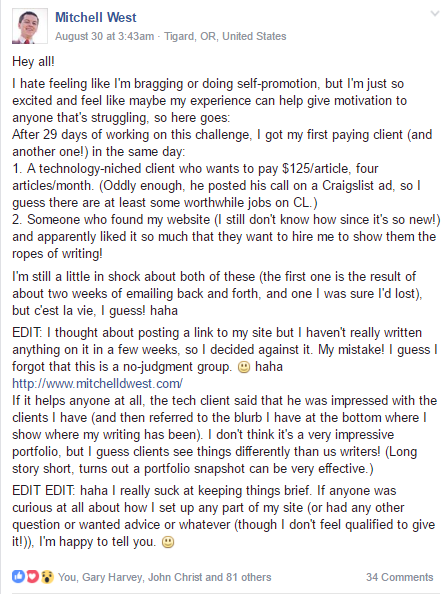 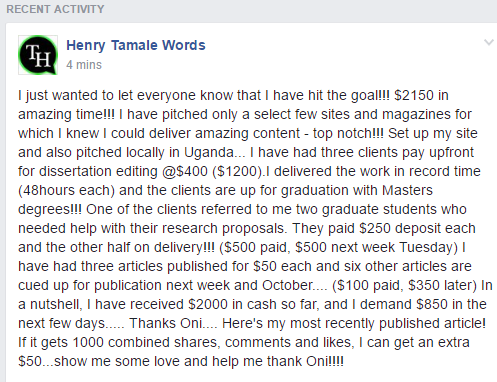 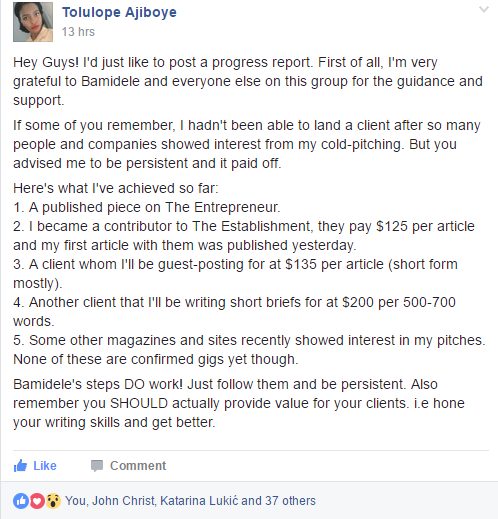 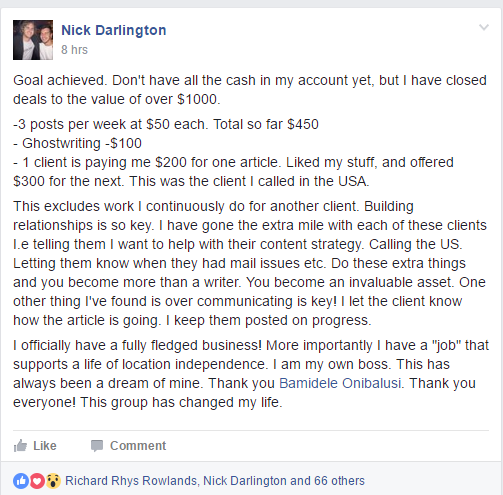 Okay, so that's it. If I include all the testimonials I have, this page will probably become so heavy that browsers will be crashing. So I'll stop right there!

If people could be raving that much -- experiencing the kind of successes above -- from a free challenge, imagine what could happen with an organized, paid course backed by support from me?

Unlike many freelance writing gurus, I put my money where my mouth is: I’m probably the only freelance writing expert that has made myself a guinea pig by starting a challenge in which I go from scratch (using a pseudonym, in a different niche and without using any of my contacts or existing resources) to four figures income within a span of two months -- TWICE! With my process, efforts and results documented publicly -- and each time countless people who followed along experienced positive results (the above testimonials came from my most recent challenge).

You see, I am so DAMN CONFIDENT about the effectiveness of my system that figuratively eating my own dog food, publicly, doesn’t scare me.

I want to give you access to my system TODAY… but for a VERY LIMITED time.

You see, Writers in Charge, my popular blog for writers, has been running for more than five years now. And right NOW, you can’t find a single course for sale on it. I have pulled existing ones offline due to my being to busy to support them, and that hasn’t stopped people from begging me to just get them into one of my courses anyhow (even if it is outdated and can’t be supported -- screenshots below) -- this is because the effectiveness of my system has been proven over and over again. 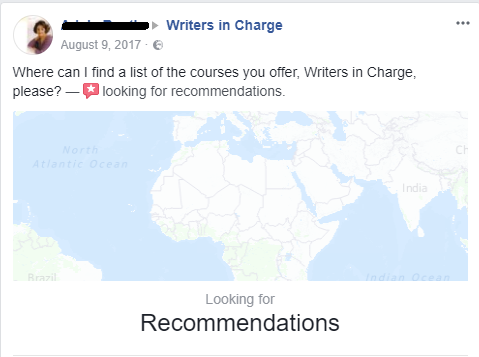 Introducing Getting Started: Kickstart Your Freelance Writing Business in 14 Days or Less 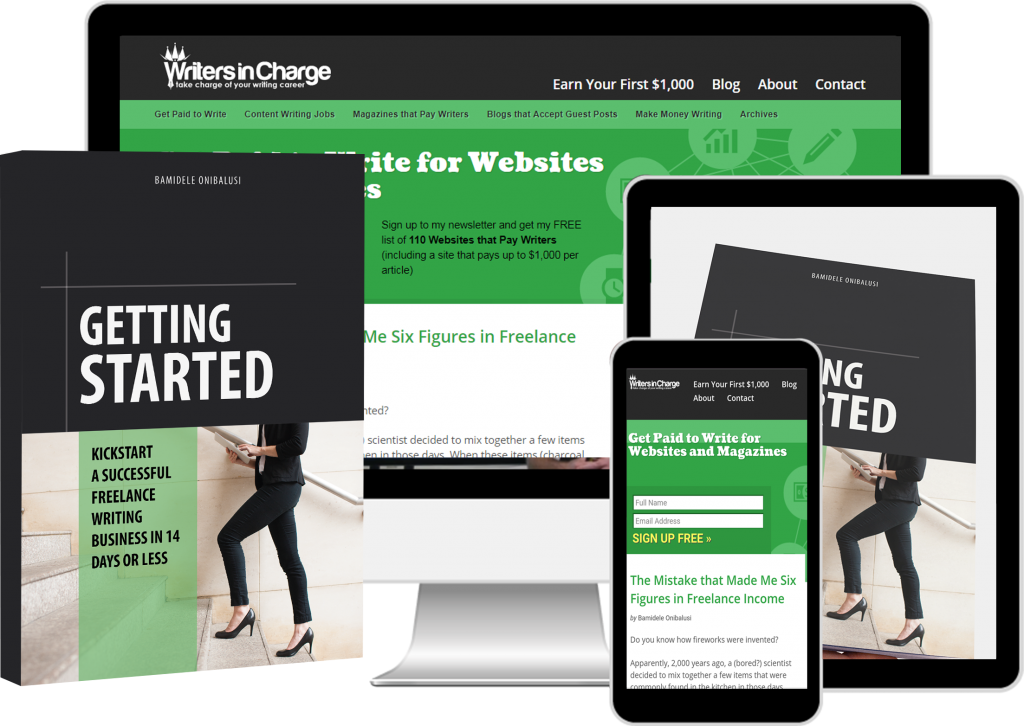 For a limited time only, I want to give you an opportunity to get access to my proven freelance writing system: this system will help you get your freelance writing business up and running in less than 14 days, and it will position you to be earning four figures monthly within a few months.

Getting Started: Kickstart Your Freelance Writing Business in 14 Days or Less is for you if…

If you fall into any of the above category, you should definitely get Getting Started: Kickstart Your Freelance Writing Business in 14 Days or Less.

However, I’d like to sound a note of warning, though:

Getting Started: Kickstart Your Freelance Writing Business in 14 Days or Less is different from a lot of other courses out there:

When you purchase Getting Started: Kickstart Your Freelance Writing Business in 14 Days or Less, you’ll get access to:

This is a Limited Time Offer...

That said, you have to act fast -- as this offer is only available for 7 days. After 7 days, it will be pulled off the market, and I can’t say when next it will be available -- the last time I pulled off my products off the market, it took over 2 years for them to come back despite people repeatedly begging me for access to them.

At the time of reading this, you can be sure that you are closer to the expiration of the 7 days during which the course is available.

Simply sign up below to instantly get enrolled into the course.

YES, I want in! I want access to  “Getting Started: Kickstart Your Freelance Writing Business in 14 Days or Less” right now.

If, for whatever reason, you decide within 30 days of ordering this course that it is not for you, you are backed by my 30-day money-back guarantee. Simply send an email requesting a refund and you’ll be promptly refunded.

What is "Getting Started" about? Who is the course for?

Don't get me wrong: this course doesn't promise that you will earn four figures in 14 days. I don't believe in, or sell, get rich quick schemes. However, it will help you set up what will be a solid freelance writing business that will be earning four figures monthly within a few months -- all in less than 14 days.

How long will the launch be open?

Is your course suitable to start a writing business in a language other than English?

I have no educational or professional experience except that I have always loved writing. Are there any opportunities for me with this lack of credentials?

Anybody who tells you that you need educational or professional experience to earn a living as a freelance writer is a joker. If you take a careful look, that person is probably earning peanuts.

See, I started earning four figures MONTHLY as a freelance writer at 16 (I'm 24 now!). As a non-native English speaking Nigerian. I hadn't even gotten into college then. So, NO, you DON'T need a degree or credentials to make this work. In fact, if you let your degree get into your head it will probably do you more harm than good.

Are there refunds? A guarantee?

YES. As with all my products at Writers in Charge, this is backed by a 30 days money back guarantee. My free materials have helped thousands build a successful freelance writing career, so of course I'm willing to put my money where my mouth is when it comes to my paid materials.

Are there other payment methods? Other questions?

Yes, you can pay with pretty much any cryptocurrency (Bitcoin, Ripple, NEO, Ethereum, etc) listed on a major exchange (Binance, Bittrex, Kucoin, etc). If you are Nigerian, I also accept local bank transfer. If you want alternative payment methods, or have other questions, email me at [email protected]

YES, I want in! I want access to  “Getting Started: Kickstart Your Freelance Writing Business in 14 Days or Less” right now.